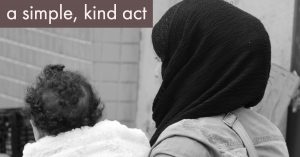 Imposter on the Cross

Please see the special note at the bottom of this week’s email.

Remember why we call today Good Friday? Not just because my birthday lands on it this year! By choosing the cross, by enduring death, taking the evil and violence of the world, and each of us, on to himself, Jesus sets the stage for an entire reboot of creation. A restart for you and me, for the Earth, for everything tainted by the rebellion.

Ahh, this is so good.

But Muslims don’t see it as such. The various Islamic views on Jesus’s death (or not) get complicated in a hurry! Between the actual words of the Quran, the traditions of the Hadith and the commentary of scholars over the years, it can be tough to discern a general belief.

Here are some of the thoughts on what happened with Jesus. I’d encourage you to kick these around in a genuinely curious manner with your Muslim friends.

• A follower of Jesus took on his appearance and died on the cross. God raised Jesus to Heaven.
• Judas died on the cross in place of Jesus.
• Jesus died a natural death. One sect of Muslims says he died in India.
• Jesus will return to earth as judge.

The first passage of the Quran usually referred to when talking about Jesus’s (non) death is Sura 4.157. I’m not your go-to person on Quran interpretation, but this passage seems to be talking about whether or not the Jews should take credit for killing Jesus, not whether or not he was crucified. I find it to be less than definitive in describing what happened to Jesus.

Bottom line: The story of Jesus’s death and resurrection is beautiful, good and true. Today is indeed a good day. May this hope wash over Muslims everywhere.

Ramadan, the month of fasting, begins May 6th. I want to invite you to join believers all over the world in praying for Muslims as they diligently seek God. Please go here and grab a copy (or 20) of this amazing prayer guide. I’m getting them for whoever wants them in my church.

How You Can Effect The Largest Election in History 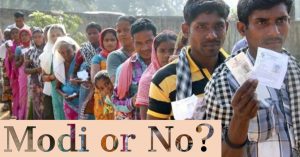 India, the blue whale of democracies, began voting today in a national election to choose its prime minister. On one side is Narendra Modi, the incumbent PM and head of the Hindu nationalist BJP party. On the other side is Rahul Gandhi, the youthful, current crown-wearer in the Nehru-Gandhi dynasty and leader of the opposition Congress Party. On the still other sides are a dizzying variety of candidates from some 2000 political parties!

This election, which continues until May 19, will see nearly twice as many people vote than the entire population of the USA! Who will win is anyone’s guess right now, although a young professional and musician friend from the south said he sees a general dissatisfaction with Modi among his peers.

Besides its mind-boggling hugeness (There are 1 million polling stations!), here’s why I think we should care about the India election: Its outcome will, to varying degrees, affect the lives of 200 million Muslims and 30 million Christians. (Tweet this.)

Modi has allowed or fomented, depending on who you ask, the increased marginalization and abuse of religious minorities. Some Muslims have been lynched by radical Hindu groups on suspicion of smuggling cows. Many fear his re-election will only continue these trends.

This election is as complex as it is huge and I know almost nothing about what’s actually going on. But God is not puzzled. He knows the good guys, the bad guys and every bit of gray in each candidate and voter. And I believe he welcomes our participation in prayer.

. . .that violence will be minimal.

. . .that God will guide the election in such a way that his kingdom comes more and more in India.

. . .that our Christian sisters and brothers would be wise, safe and smelling like Jesus.

. . .that our Muslim cousins would be heard, protected and invited to ever increasing life.

Can you respond to a question for me? (Seriously, just “click, click, submit!): Do Muslims and Christians serve the same God? Or another way to consider this: Is the same being petitioned when Muslims pray to Allah and Christians pray to God? Please go here to click on a multiple choice answer.

The Second Question You’ve Got to Try! 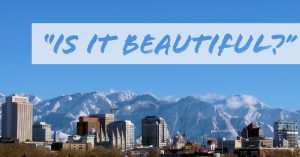 I’m guessing when you hear, “Salt Lake City,” the first M-word that comes to mind is not “Muslim.” While one could argue that Mormons and Muslims have similarities in addition to both being “new and improved” versions of Christianity, they are not often associated.

Even so, on a recent trip to Utah, I was on the lookout for Muslims. In part, because I usually am, but also because I was fixing to tell a local church they should reach out to them. Such an admonition becomes more annoying than normal when none live nearby!

Happily, between landing around noon and turning in my rental car at 7 pm, I met three or four Muslims, a super kind Thai woman and a grumpy Russian guy (His grumpiness likely owing more to traveling with teenagers, than with being Russian!).

I also had a minor league epiphany: Possibly the best second or third question to ask when building an initial relationship with a Muslim is, “Is it beautiful?” In this case “It” is wherever they told you home was when you asked first, “Where are you from?”

Since beauty is in the eye of the beholder and many of the Muslims we’re likely to meet carry nostalgia from a life somewhere else, this question will probably be answered affirmatively.

Odds are also good you’ve not been where they’re from, so the question is honest and ripe for follow up with, “tell me about it,” or “I’d love to go there someday.”

I know I love to tell people how beautiful Indiana and Colorado, my “froms,” are. Don’t you? So give this a try. Expect it to lead to questions about family, comparisons to current life and, if you’re feeling feisty, to the God from whom all beauty emanates.

If you and a like-minded Christian friend were going to start a book club with a couple of Muslim friends, what books might you want on the reading list? For me, I’d want to read Leif Enger’s Peace Like a River, probably my favorite novel of all time. If this question intrigues you and you can spare us a moment, please list a couple here.