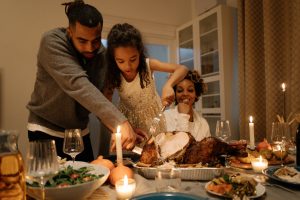 What do Muslims do for Thanksgiving? Well, most of them probably go to work or school. But what about the several million who live in the U.S.? Do families celebrate with get togethers and eating halal turkey? Do they watch football? Presumably Robert Saleh will. He’s the head coach of the New York Jets and a Muslim of Lebanese descent. Even though no matter which of the six teams playing today win, he’ll still be second to last in the league!

Khalil Abdur-Rashid the Muslim Chaplain at Harvard University says, “Thanksgiving. . .affords people who are normally heedless and forgetful of the myriad of blessings, of which we are recipients, to at least once a year acknowledge those blessings. Consequently, Thanksgiving, while not directly legislated by Islam, is at least in essence compliant with the spirit of Islam.”

He goes on, “In most houses, the practice of circling the dinner table with family, expressing what we are thankful for, and why we are thankful for it, is a way of not only expressing thanks to Allah, but also declaring and announcing our gratitude to others. It is an expression of the verse in the Quran, “And as for the blessings (ni’mat) of your Lord, proclaim them!” (Quran 93:11).”

You are a blessing! I’m thankful to God for you and grateful to you for reading Muslim Connect.

Maybe there are some Muslims on the way to celebrate Thanksgiving at your house right now, maybe tomorrow, maybe Christmas or next year. That would be a blessing to them and to you and your family. I’m grateful for that as well.

Vests of Death: Why Do Suicide Bombers Do It? 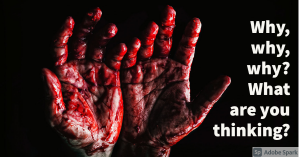 The Richest Muslim in the World 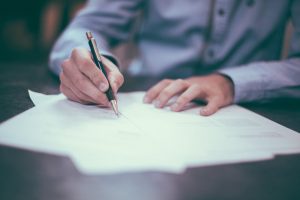 The Arabic word madrasa basically means a place for education. Outside of Arabic speaking countries it has come to refer particularly to institutions focused on Islamic training. As you’d guess, there’s huge diversity in the theology and purpose of various madrasas.

Years ago some friends and I were taken to lunch after Friday prayers to a madrasa in Malaysia. As we sat on the floor, feasting on a mountain of yummy chicken and rice, a young student put his missionary training into action: With earnest sincerity he put his hand on my pastor’s knee, looked in his eyes and said, “Brother, become a Muslim.” That will leave a mark, pretty much whoever you are!

Madrasas in many parts of the world serve similar purposes for young Muslims as AWANA does for kids in evangelical churches. I think AWANA has a leg up on most madrasas in that kids can memorize scripture in the language they speak! Muslim kids usually memorize the Quran in Arabic. They learn how to say it, but maybe not what they’re saying!

Think about why you take (or might take) your kids to Sunday School, youth group or AWANA. Probably most Muslim moms and dads have similar motivation. They want their offspring to grow up and live out the faith. They want good and respectable kids.

If you grew up in church, maybe you remember early Sunday School days. One of the first people ever to teach me how to follow Jesus was Ethel Smith. Her face deeply wrinkled, breath smelling like Sen Sen, it was fifty years ago she taught our unruly class and I’ve never forgotten.

The good people at PrayerCast.com just released a beautiful video in which a former Muslim leads viewers in prayer for kids and adults in madrasas. Will you watch it and pray with me for the winsome, kingdom work of Jesus to break loose in madrasas all over.

Much thanks to those who responded to the questions in last week’s Muslim Connect, “Muslims Are Trouble.” I appreciate you. It’s not too late to weigh in, if you wish.