The First Really Mean Thing I Ever Saw 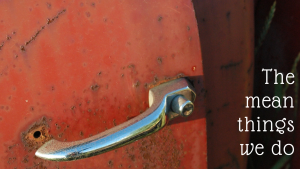 I was a little munchkin (Well, young. Never really was little!) when I first found out grownups could be mean to each other. My grandparents were taking me with them on vacation to Canada. At a stop somewhere along the way, Grandpa was frustrated with Grandma for a reason unknown to me. To demonstrate his frustration he began to drive away just after she opened the door to hop in the cab of the truck.

It wasn’t the funny tease of pulling forward two feet when your passenger reaches for the handle, but something much more sinister. I can still feel the echo of the panic I felt watching my Grandma trot along, eyes wide as she tried to get up in the truck.

She made it, and while I don’t remember, I suspect I was the only one who talked for the next few hundred miles.

We do mean stuff sometimes, don’t we? And say things designed to cut, shame and diminish others. My “everyone is stupid but me” attitude occasionally emerges in the most regrettable ways.

I don’t know what was behind my Grandpa’s uncool move. We don’t know the pain people are feeling, do we? Heck, we can’t even figure our own a lot of the time.

While I want us to passionately advocate for Muslims, and do so with the shrewdness of snakes, Jesus also says be innocent as doves. Grace to you and me both as we walk that razor edge!

My pastor recently recommended a John Stossel video about refugees and immigration. It’s smart, sharp, but not mean. I encourage you to watch it and pass it along as you see fit. I think it strikes a note near where we want to be as we invite others to love Muslims the way Jesus does. 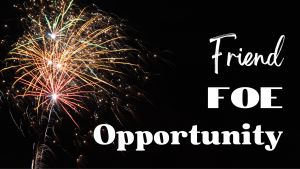 I have a love/hate relationship with fireworks. If you’ve ever been in an Indian city for Diwali you might relate. Mind numbing cacophony with ‘round the clock explosions. If I lived in India, I’d definitely visit Pakistan during Diwali!

Later though, while staying in England, an amazingly kind Afghan family invited us to shoot off fireworks with them to celebrate Guy Fawkes Day. Two immigrant families commemorating a guy who failed to blow up Parliament: A tad surreal, but the relationship begun that night lasted the entirety of our stay.

July 4th is just around the corner and provides a plum opportunity for us to connect with Muslims.

Is there a family in, or just outside, your sphere of relationship you might reach out to with one of these invitations:

Here’s what I’m considering: There are two boys in my son’s karate class named Yusef and Islam. Going out on a limb and guessing their parents are Muslim, I’m going to try to initiate a conversation with them that will lead to a July 4th visit of some sort.

Does anyone come to mind for you? If yes, let’s do it. If no, please say a prayer for the rest of us.

If you think yes, but hurdles immediately pop into your mind, please take 30 seconds and jot them down here. Maybe together we can find ways to tap the power of God so we can be the people of Jesus.

PS: Let’s continue to pray for Afghans as they wrestle with yet another tragedy. May God have mercy.

🧠 What Shapes Our Brains? 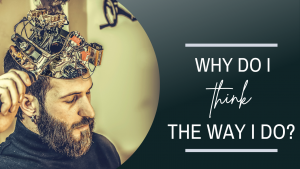 I so want to think I approach life based on what the Bible says and not Facebook, but I’m not sure the data supports that conviction. The Zuckerberg siren woos me in and pretty soon I’m all feisty about memes, ideas and ridiculousness that neither help me nor help me help others.

If you take a minute to consider what shapes your general thinking, as well as specifically regarding Muslims, what do you come up with?

Here’s an incomplete list of possibilities. I’m wondering for each if I should aim for an increase or decrease.

Writing today’s Muslim Connect has helped me decide to quit Facebook for a season. I may float out a question or idea from time to time, but I’m killing the “spurious scroll!” During a short break this morning I read a couple pages of a Bob Goff book instead of cruising Facebook. It felt like real nourishment, solid goodness, rather than another handful of digital potato chips. So I’m done, and telling you to help seal the deal! Let me know if you’d like to join me in this. If you’ve already kicked Facebook to the curb, just smile smugly and wonder what took me so long!

This’ll Be a Kick! 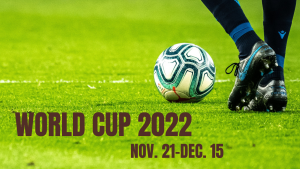