Pregnant, Enslaved and Friends with God 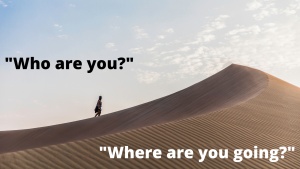 When’s the last time you heard a sermon on Hagar or Ishmael? True confession: I don’t think I’ve ever preached one. But my good friend Deborah is going to, should Covid let her out of the house! Her thoughts on that dynamic duo have encouraged me this morning and I’d like to share a couple of them with you. (The majority of the following thoughts are from Deborah, unless they sound goofy. In that case, they’re from me!)

Similar to the way Christians are linked to Abraham by heritage, rather than blood, Muslims feel a link to Ishmael, and by extension, his mom Hagar. If we dig into their story instead of simply viewing them as the counterpoints to the people of the line of promise, we’ll find all sorts of intrigue, bad behavior and a God who is kind, attentive and conversant with the least likely of people.

Hagar names God!
In Genesis 16.13 Hagar was the first person (and a woman!) in scripture to name GOD. “You are El-roi,” for she said, “In this place, have I actually seen the one who sees me?” He allowed Himself to be named by a slave woman! How valuable is this as we consider how to “see” and “hear” Muslims and God’s heart for them?!

God engages Hagar
In Genesis 16.8 after a pregnant Hagar has scuffled with Sarah and fled, the angel of the Lord found her and asked, “Hagar, slave of Sarai, where have you come from and where are you going?” How amazing, warm and kind is this? Basically, the God of the Heavens ask the 3X outsider, “What’s your story? What have you dealt with and where is your life headed?”

To think God cares to know those things of you and me and Muslims as well. Stunning. Do you have an opinion on Jordan Peterson? (What?!? Canadians two weeks in a row?) I’m ambivalent, having enjoyed much of the limited exposure I’ve had to him, but (to his great consternation, I’m sure) disagreed with some of his thoughts.

However, when the guy who’s been labeled “the most influential public intellectual in the Western world” releases a video called “Message to Muslims,” my head cocks to the side like a curious German Shephard puppy.

You can watch the video here. It’s six minutes long, but for people like us, probably worth the watch.

I find a couple of things worth noting:

I wonder how I (and other Christians) would feel about a Muslim speaking to all of us this way? Imagining some of my response, I’m afraid it indicates I have a heart-level sense of superiority to Muslims. Dang it.

A guy I follow on Instagram, khaledbeydoun says, “This video. . . has to be one of the most condescending, tone deaf, inherently Islamophobic rants I’ve seen in some time. While sitting from his perch, it sounds as if Peterson is a parent scolding his children.”

Even the Muslims fans of Peterson seem to be distressed by this video. “Dr Peterson, I’ve been following your work for years now, and your lessons helped me process and go through a lot of challenges I had in life. However, I’m disappointed by how shallow and presumptuous this video was.”

I’m no Jordan Peterson, but I’m reminded to consider afresh the ways I think about Muslims and the language I use to both talk about and to them.

What’s the Deal with the Star and Crescent? ☪️ What Are Your Wild Weekend Plans? Got big plans for the weekend? I’m taking our middle school youth group boys on a hike. This is my personal parallel to what’s going down for a million Muslims who are Haj-ing to Mecca this weekend.

•  We’ll both deal with hot and sweaty people.
•  There will be rock throwing in both places.
Us: Skipping stones in the river.
Muslims: Throwing rocks at Satan.
•  We’ll both fear (Hope?!) it’s a once in a lifetime experience!

As you may know, the Hajj is one of the five pillars of Islam; a religious pilgrimage that really has no parallel in Christianity. All Muslims, if physical and financial health allows, are required to make the trip at least once in their lives.

Muslims want to go to honor the requirement, of course, but also because forgiveness is on offer: Muhammad reportedly said, “Whoever performs Hajj for the sake of Allah and does not utter any obscene speech or do any evil deed, will go back (free of sin) as his mother bore him.”

Who doesn’t want forgiveness? I need it, and without pointing fingers or anything, I’m guessing you do too. Will you join me in praying that Muslims, those in Mecca this weekend and those who aren’t, will find the forgiveness they seek? The death and resurrection of Jesus, if sufficient for us, is also sufficient for them.

Grab this brief and well done prayer guide for Muslims on the Hajj. If you’re feeling really scrappy, share it: Forward it with this email to believers who might be interested, get the link into your church’s bulletin, or go old school and print out a few copies. Your dad and mine delights to answer our prayers.