God at the Hajj 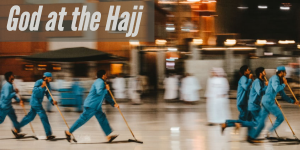 If you were going to slip away for a few days before school starts, where would you go? The beach? The mountains (I have guest rooms!). Maybe an amusement park? How about joining two million others for the annual Islamic pilgrimage to Mecca called the Hajj? The weather forecast is clear if a little toasty.

This year nearly 8000 teams of helpers will oversee every aspect of the gathering which runs from August 9 to 14. I imagine the Hajj is an economic boon to Saudi Arabia, but the cost of cleaning up after the party might make it a wash.

One of the five pillars of Islam, the Hajj is a requirement for all Muslims who are physically and financially able. It involves a series of rituals and prayers, and for many Muslims is a highlight of their lives.

You know who else will be in Mecca next week, right? God. And this year I’m wondering what God might want to do for Muslims during the Hajj.

Give that a moment’s thought. What does God want for Muslims as they experience this event? Here are some guesses. I say guesses because I don’t want to be cavalier about knowing the mind of God and because God probably wouldn’t aliterate! (Tweet this.)

Safety: Crowd panic and other miscues have caused significant loss of life before. Let’s pray for protection for the pilgrims.

Surrender self-righteousness: One of the great traps of the Hajj is the mixed-up sense of having earned merit with God.

Serious conversations: As people gather from all over the world, I can see God encouraging conversations about justice, who He is and what He wants.

All of these fall under the broader category of “abundant life:” The freedom, hope, joy and peace that Jesus said he came to bring. Join me in praying for that abundant life for Muslim pilgrims in these coming days.

Share your thoughts about what God might want for Muslims on the Hajj in the comments below.

9 Responses to God at the Hajj