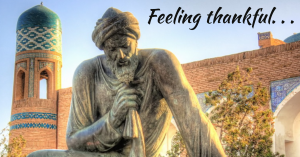 I’m feeling Thanksgivingly these days. Living in southern Colorado in 2019 and typing on an Apple computer give me a pretty high baseline for gratitude!

When we think of Muslims, thankfulness might not be the first thing to come to mind. Much is said and some things are actually happening which generate concern. Not to challenge any particular bit of that, but maybe to very slightly balance the equation, here are three things for which we can be grateful to Muslims.

Thank you, God, for these people you’ve made and the contributions they’ve made to our world.