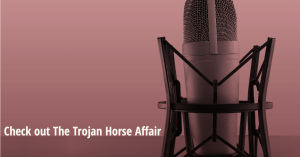 A long time ago I lived in England for a short, but glorious, time. The beauty of the West Yorkshire moors combined with a high percentage of residents of Pakistani descent and the smell of curry wafting down the street made my little bit of Bradford feel like on overlooked corner of Heaven.

So when Ira Glass told me to check out a new podcast called The Trojan Horse Affair about a scandal in Birmingham, England involving Muslims, I told him yes, I’ll listen. He said the fall out of a mysterious letter to the City Council has adversely effected thousands of school kids, mostly Muslims, in England and beyond.

Three episodes in, I’m really glad I did. And I want to invite you to check it out as well. Here’s why:

I’m only half way through, so no guarantees on how it ends! (And note: there is some explicit language.)

To benefit the rest of the Muslim Connect tribe, please share your thoughts on The Trojan Horse Affair. Even better, post some other podcasts that will help us think about Muslims the way God does and love them like Jesus does.