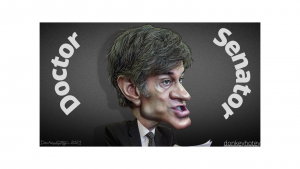 As this Muslim Connect email goes out, Dr. Mehmut Oz is leading the Pennsylvania Republican senate primary race by one tenth of a percent, with around 17,000 votes still to be counted. Should he win the primary, he’ll become the first Muslim to run for the U.S. Senate.

This is a fascinating story on several levels. For starters, Dr. Oz has an amazing medical pedigree. Although he’s been roundly excoriated for some of his views, he’s well credentialed, extensively published, and he’s operated on a lot of hearts.

If you know him, it’s probably through his appearances on the Oprah show or his own tv Emmy winning show. He’s America’s doctor!

He’s also the American born son of Turkish parents with a dual citizenship he’s pledged to surrender if elected. He grew up with a dad who followed a rather traditional Islam, while his mom favored the secular Turkish identity of Kemal Ataturk. Dr. Oz has said he’s drawn to the more mystical, Sufi form of the faith.

If he wins his primary, it will owe in part to Donald Trump’s late game endorsement. Therein lies another amazing layer: Dr. Oz is a Muslim and a Republican, pushed forward by the most anti-Muslim U.S. president in history! Strange days indeed.

What do you think? Could a moderate Muslim, a first generation Turkish senator be a good thing for Pennsylvania, for the U.S.? Is it possible in the role, Dr. Oz could help us navigate an increasingly tenuous relationship with Turkey and a feisty President Erdogan? Would he serve as inspiration and representation for other American Muslims?

If Dr. Oz were to follow Obama’s path, serve a term in the Senate then jump to the White House, I would both eat my hat and chuckle at the irony!