Who Will Get the Muslim Vote? 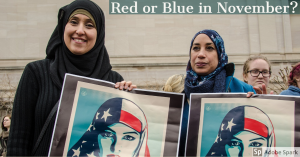 So, it’s pretty much a given the U.S. will choose a president in a few months. Although the Facebook post claiming, “In 20 years there will be enough Muslim voters in the U.S. to elect the president” is patently false, Muslims may make a difference this fall.

I’ve been wondering lately how Muslims tend to vote, for whom and why.

Why does this matter? I suspect most Muslim Connect readers tend to vote conservatively. Since data indicates that most voting Muslims tend blue, there’s a big difference here. If we’re going to connect, we might as well get stuff like this on the table and talk about it.

In a funny and poignant New York Times opinion piece, Wajahat Ali quotes Hussein Rashid, a professor of religion at Barnard College, who concedes that he’s a tad bitter about his political options, “As a Muslim, I’d vote for Jesus, but the Republicans won’t let him in, and the Democrats don’t believe in him.”

My reading today indicates that Muslims are skeptical of Democratic advances and don’t feel sought out or heard, but, according to Haroon Moghul, the other alternative is to “vote themselves off the island!”

It seems there are a few Muslim Republicans, but a strong majority of Muslims will vote Democratic this Fall. And apparently Bernie Sanders is the leading candidate of choice for Muslims right now. Check out #Muslims4Bernie and #InshallahBernie. I don’t pretend to fully understand why he’s the favorite, but he’s seen as the one who’s done more to hear, validate, support and defend Muslims.

According to the Economist, “In 2001, a survey of American Muslims found that 42% reported voting for Mr. Bush against 31% for his Democratic rival Al Gore.” So much has changed since then.

6 Responses to Who Will Get the Muslim Vote?